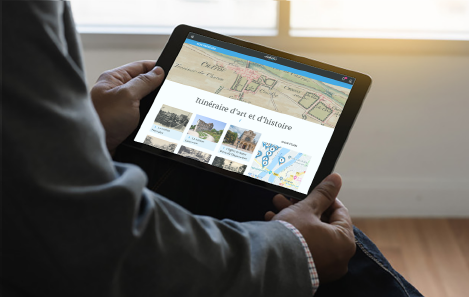 Looking For A New Role. A Holistic Approach For Museums

The echo resounds in the corridors of the closed museums, the animals have regained possession of the parks, the roar of the cars have given way to the sounds of nature. At the heights of the Covid-19 lockdown more than half of the world population shut itself up in their homes, pouring their gaze towards the screens trying to find an answer to a new reality. And if initially the only refuge seemed to be in a television series on Netflix or other similar platforms, humanity quickly realized that on the screen, the only window to the surrounding world that remained accessible, it would have to find other answers.

More than 3 billion people use a smartphone today, a figure that is constantly increasing if you think that 1.4 billion are sold worldwide every year. To these already impressive figure we must add over 1 billion tablets and 1 billion computers.

Infinite pairs of eyes focused on a light source that, if until recently alienated humanity from face-to-face contact, reading and culture by offering content of a flat quality, during the coronavirus crisis has become the greatest companion for many to help them overcome the crisis and loneliness. The digital sphere in general and the telephone in particular, accused of being a factor that will contribute to the depression and loneliness of the human being, have paradoxically become the universal means to overcome them. Even for technophobics, fear has been defeated by the human need to communicate.

And in the acceptance of this addiction, the need to find an answer, not only to more or less pleasant amusements, but also to the needs of the spirit and body, has emerged at the same time. This explains the meteoric success of apps and social media accounts and websites that offer “wellness” activities from meditation to yoga, and at the same time the exponential growth, even higher than that of the spread of the Coronavirus, of the offers by theaters, historical sites, museums and orchestras of online content accessible to all.

This is a formidable opportunity for the actors of the cultural world to occupy a space that has been neglected for a long time. During the month of March this year, the search popularity of topics such as “virtual tour museums” or “streaming theater” or “online museums” went from figures of less than 10% to peaks of 100% (source: Google Trends ).

Even general searches, such as the Berlin Philharmonic, which averaged less than 50% in terms of popularity, have doubled their value thanks to the offer of free streaming of their concerts. If we add the word “streaming” to the same search then the results are even more significant, going from 0% to 100%. The same experiment, with similar results can be repeated with “Egyptian museum” and “Egyptian museum online” or “Vatican museums online”.

This trend was able to be realized thanks to the awareness of their social and educational role on the part of the great cultural actors who responded to their closure by bringing museum spaces and other cultural activities into homes by offering high quality content accessible to all and affirming their presence. also on social networks such as Instagram, Facebook and Twitter where they have found great success thanks to hashtags like #MuseumfromHome, #MuseumBouquet or #Lamusicanonsiferma coined by the Giuseppe Verdi Symphony Orchestra.

This trend was unfortunately very short lived the online offer not having met the expectation, the public has gone back to its old habits.

According to the definition of ICOM (The International Committee of Museums which has 119 member countries) “The museum is a permanent, non-profit institution at the service of society and its development, open to the public, which carries out research on material and immaterial testimonies of man and his environment, acquires them, preserves them, communicates them and specifically exhibits them for purposes of study, education and pleasure “.

A redefinition of this role is currently underway with proposals from the various member countries. The Italian proposal of May 2019 puts forward precisely the role of museums at the service of society:
“The Museum is a permanent, non-profit, accessible institution that operates in a system of relationships at the service of society and its sustainable development. It carries out research on the testimonies of humanity and its cultural landscapes, acquires them, preserves them, communicates them and exhibits them to promote knowledge, critical thinking, participation and the well-being of the community. “

A redefinition of the role of culture is needed also in the digital sphere.

It is certain that after the current pandemic crisis the social role of museums will become even more central. As highlighted in a recent article published in “The Museum Journal” “It is interesting to note that the periods during which the social role of the museum is most discussed correspond to periods of economic crisis or socio-political unrest and conflicts, both in Europe and in Latin America. This was the case in the West after the financial crisis of 2007-08, but it was also the case in the 1970s after the first oil shock, and earlier, in 1930, when articles on the social role of museums.”

Museums are called upon to respond to this new reality and digitization that has come to the fore will be the vector to face this challenge. In a study published in 2017 on digital transformation in the museum industry 86% of museums expressed the belief that the best way to interact with their visitors is inside the museum itself while only 44% emphasize the importance of the sphere online and social media and only 7% are satisfied with their apps developed to interact with visitors.

Digitization cannot be limited to making its collections accessible online but must offer the conditions and means to ensure a sustainable future and the validity of museums for future generations as well. Today a holistic approach is needed in which the different roles of the museum spaces must support each other by extending the interaction with the community well beyond the moment of the visit. Technology is the medium through which this goal can be achieved by creating a permanent communication channel with the community.

Find out more on how to reach out to your audiences